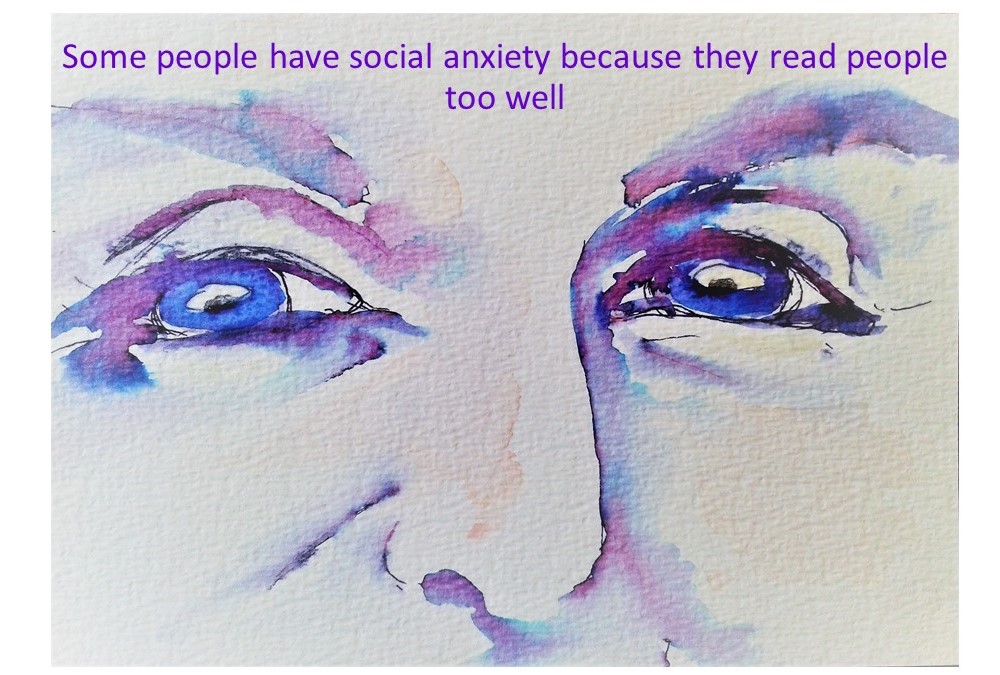 When researching happiness in HSP for my book ‘Expedition Highsensitivity’, I was thrilled to discover that (high) sensitive (HS) people have many personality traits in common with (highly) gifted (HG) people. Some of these trait combinations can set either ‘group’ apart from society. Particularly specific combinations of traits than lead to, for example, ‘awkward’ social situations or psychic abilities can be challenging for gifted or sensitive people.

Normal behavior and its potential misreading
But how can (high) sensitivity and giftedness alike give rise to some misunderstandings or misinterpretations in interaction with less gifted or less sensitive people?
Or in short – the rest of society.
Easy.
These are my 10 favorite potential misreading:

1. HS and HG are highly curious and have many interests

Possible problems this can cause are: They start many projects and perhaps don’t finish them when the concepts have lost the excitement of being new and the work becomes tedious. They may nog work well in a group.

Possible problems this can cause are: They may get frustrated with others who think slowly in comparison.

Possible problems this can cause are: They may be argumentative and oppositional to other’s set ways of thinking. They oftentimes resent conformity.

4. HS and HG are deep thinkers

Possible problems this can cause are: They hate deadlines. This may cause them avoiding doing work at all rather than do half a job.

5. HS and HG does not expire, but can deep over time

Possible problems this can cause are: Both HS and HG may get more intense over time. This holds for people who are self-aware. People who lack (self-) awareness, may just fail prematurely or not come to fruition, as a consequence of being ignored, neglected, impractical, or without the necessary support to succeed.

6. HS and HG exhibit greater intensity and increased levels of emotional, imaginational, intellectual, sensual and psychomotor erethism, which for them is a normal pattern of development

Possible problems this can cause are: These patterns can be perceived by psychotherapists and others as evidence of a mental disturbance because most of the population lacks accurate information about the special characteristics of sensitive or gifted individuals, couples and families.

7. HS and HG have an urge for intense living

Possible problems this can cause are: When misdiagnosed, HS and HG people can end up being prescribed medication to suppress the ‘symptoms of giftedness’ which will lead to the neutralization of the wonderful inner fire and eventually lead to minimalization of the  potential for an accomplished and fulfilled life.

8. HS and HG have other intellectual, emotional and social standards, ideals and hopes than less sensitive of gifted people

Possible problems this can cause are: In want of solid knowledge about what is’ considered normal’ for HS and HG people, they are easily labeled neurotic, which renders them personally and emotionally vulnerable to a number of divergent relationship difficulties at home, work, school and in the community. Results of this kind of misdiagnosis may range from neglection to misguided counseling strategies designed to ‘normalize’ the inner world of HS and HG people.

9. HS and HG have and exhibit high levels of intensity and sensitivity

Possible problems this can cause are: When – or if they seek therapy with therapist who have no special training in their identification and assistance they are frequently misdiagnosed because since their complex development pattern is overlooked.

Possible problems this can cause are: (Uninitiated) experts when faced with these characteristics, can easily mislabeled them as signs of a personality or attentional disorder. Among the ladles of the erroneous diagnoses are histrionic, dysthymic, cyclothymic, borderline, narcissistic, ADHD (Attention Deficit Hyperactivity Disorder) or ADD (Attention Deficit Disorder). In case of HS and HG, these labels oftentimes are describing normal stages of positive disintegration rather than disorders.
These misreadings make  that these people are typically misunderstood and underestimated by peers, by society, and usually even by themselves.
Exeptionally gifted versus just being irritating
Just imagine that you have an average IQ, say it’s 100. And you live in a group of people that all have IQ’s between 70-80. How would you feel? Awkward? Misunderstood? The odd one out? Or even stupid because nobody seems to understand the way you think and react?
I read this story about a young female student1 who had spent 18 years believing she was not intelligent because she asked more questions than the others in class. Later, in one of her university classes, when the characteristics of the gifted were discussed, the woman was so moved by what she learned that she identified with the gifted even though she was certain she was not one of them.
She was so affected by the lecture that later that day she spoke to her parents. During this conversation she discovered that she has an IQ of 165 (which corresponds to ‘exceptionally gifted’ in most rating systems2). Years back, school personnel had advised her parents not to let her know about her extraordinary IQ. This choice resulted in a low level of academic self-esteem in the young girl and the absurd self-conception of being stupid!
The same feeling of being stupid can happen to a (highly) sensitive child, if it is not allowed to live according to it’s true nature.
Growing up as a (high) sensitive or (highly) gifted child
A challenge for (highly) sensitive and (highly) gifted children is growing up with and are being often socialized by significant others who do not grasp their nature well enough in order to assist them, guide their ideas and evaluate their actions with appropriate feedback.
Parents can also sway between being proud of their offspring and being scared of the requirements and ‘differentness’ of an either highly sensitive or highly gifted child. I addition, parental pride on one hand and fear of social stigma on the other can lead to a parent giving inconsistend feedback to their HS or HG child.
Hence, the child is in the know if it’s sensitivity or giftedness is good or bad or maybe even very bad.
Concept of self
This vagueness may muddle up it’s concept of self. It’s self-perception may develop ambivalently and slowly, which in turn can confuse people in it’s souroundings. Especially other children may have problems to identify with a child, any child with a blurred idea of who it is and what it stands for. Out of this uncertainty, other children might turn to giving negative feedback to the HS or HG child, a coping mechanism to handle their own uncertainty about the friend or school mate. Such negative feedback, if internalized, can easily lead to a self-perception of the HS or HG child in which it is underrating itself. Just like our aforementioned female student did.
As a consequence, most of the gifts and capacities of HS and HG persons are easily underutilized, denied or simply undiscovered and they may never fulfill their full creative potential.

Please ‘share’ your opinion in the Comments field below!

‘Is there a biological cause for High Sensitivity?’ Find out on the HSP congress in The Netherlands, 13 October! Here’s how you save 10% on your registration.  I will launch my book, a practical guide and travel report on HSP on this congress!
Let other people in your network benefit from this article by SHAREING it through Facebook, LinkedIn or Google+.
Do you like this article? Be sure to read: ’8 forms of intelligence – and you can be highly gifted in any of them.’ Online June 21th.
Are you triggered by this article? Know then that I’m offering a (free) introduction session where you can get more general tips or tailor-made advice for your personal situation. Call 06-53667256 or send an email to info@ankewebersmit.com.
If you are looking for inspiration to develop and strengthen the power of imagination in your life, just give me a call (06-53667256) or send me an email ad find out how you can use your imagination to create the life you want.
Don’t want to miss an article in the future? Sign up for my (monthly) newsletter with all articles and more interesting information! Go to: http://www.ankewebersmit.com.