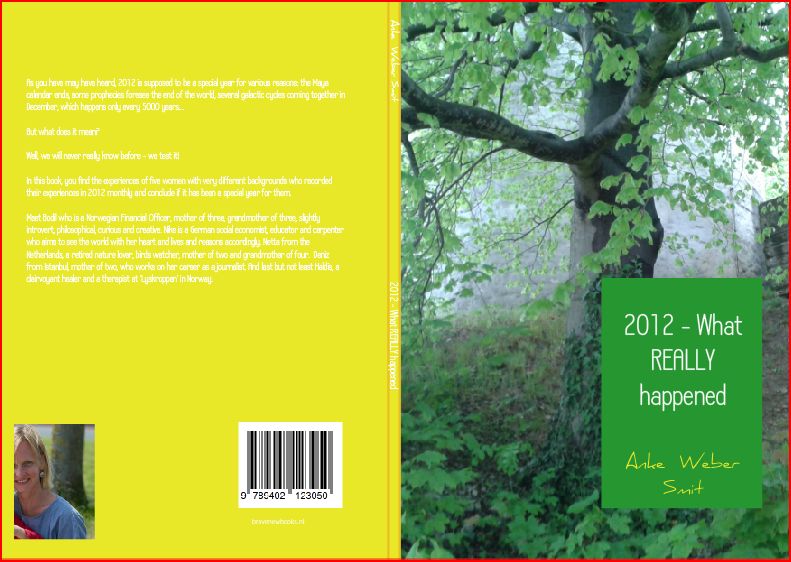 Hurray!
I don’t know how many of you are or were interested in the year 2012
Or who of you know – or care that I am editing a book about this special year.

The book is about:
2012 – What REALLY happened?
4 nationalities
5 women
12 month
Find out!
It’s been a process but now I just heard from the last author that her Norwegian text is translated to english, which means: I can assemble the chapters of the book and after a thorough proof-read send it to be published! This is what I’ve been dreaming of since the end of 2011.
As you have may have heard, 2012 is supposed to be a special year for various reasons: the Maya calendar ends, some prophecies foresee the end of the world, several galactic cycles coming together in December, which happens only every 5000 years….
But what does it mean?
In alternative circles, it is often thought that we are growing towards a higher collective consciousness and towards a ‘golden age’ where things get better and better. Other ideas cover the apocalypse or just-that nothing special happens at all! Well, we will never really know before – we test it! When at the end of 2012 we look back thinking ‘Hey, indeed, that was so different before 2012′.
But people forget. And others don’t pay attention And yet others don’t have anyone to share the events with that they feel are happening, but are probably not accepted in their peer group.
So here I present to you: Our very own TIME DOCUMENT. It’s a book in which five different individuals from different walks of life, different ages and nationalities tell about what 2012 was for them-month for month.
And conclude: ‘ Was 2012 a special year or not?’
In this book, you find the experiences of five women with very different backgrounds. Meet Bodil who is a Norwegian Financial Officer, mother of three, grandmother of three, slightly introvert, philosophical, curious and creative. Nike is a German social economist, educator and carpenter who aims to see the world with her heart and lives and reasons accordingly. Netta from the Netherlands, a retired nature lover, birds watcher, mother of two and grandmother of four. Deniz from Istanbul, mother of two, who works on her career as a journalist. And last but not least Haldis, a clairvoyant healer and a therapist at ‘Lyskroppen’ in Norway.
It’s been a process. We started out with 15 wildly enthusiastic contributors at the beginning of the year 2012. The participants were determined to use this unique opportunity. They each document every month what happened, to eventually objectively answer the million dollar question: does 2012 indeed deserve the status of a unique, special and life-changing year, as is predicted by many sources? Or was it really just a rather normal year as any other?
Well, from the 15 driven authors that started off, more than half had dropped off already by June 2012. Different reasons really, not least that their lives had developed in rather drastic ways, so the story became too personal for publication. The remaining 8 die-hards strode on boldly but during the summer holidays and the autumn another 2 had to lay down their pens and surrender to the diverse challenges that life had presented them with. The last of the drop-outs was myself, actually. Though wildly determined to finish this exciting real-life experiment really, I had to face defeat when we learned that we would leave Norway and move back to The Netherlands. The planning of this international move with kids and cats took up every spare second and so-I dropped out as well.
So yes, for me it has been a special year, but how have the other authors experienced the much – discussed 2012? Just a few more weeks and you can find out in the book ‘2012 –  What REALLY happend!’
I’ll keep you posted about the developments and give note when the book is available via Bol.com (=

Further subjects for this blog will be:
-> Experience your mind
-> What do you see when you look at yourself?
-> What eats you up? Presenting eating disorders